Liwa Primary School from Nyanga has clinched the prestigious Growsmart literacy competition winner’s title from 160 competing schools to win the Western Cape finals, which were recently held at the V&A Waterfront.

Nyanga is one of Cape Town’s oldest townships and the legacy of its troubling and violent past persists today. Known as the ‘murder capital’ of South Africa, the SAPS annual crime statistics released last month confirmed Nyanga had the highest number of murders recorded at any police station in the country for the fifth year running.

Despite being located in this notoriously dangerous neighbourhood, Liwa Primary School’s hard-working and talented team rose above the difficult circumstance in the community and excelled to win a new iPad learining lab worth R350,000 to further improve education at the school. The top team’s members also won R20,000 each to further their education and their mentor won R10,000.

Growsmart, the leading education initiative by Growthpoint Properties in collaboration with the Western Cape Department of Education, is an annual programme focused on boosting the literacy, numeracy and science performance of primary school children. It will celebrate a decade of positive impact on education in the Western Cape next year. It is also offered in the Eastern Cape.

Brian Schreuder, Deputy Director-General: Curriculum and Assessment Management Western Cape Education Department, attended the finals where he remarked that by working together, as the department does with Growsmart, we are all better and stronger.

Mzolisi Diliza, Chairman of Growthpoint’s Social, Ethics and Transformation Committee, says, “We are thrilled with the success of the public-private partnership between Growsmart and the Western Cape Education Department, and pleased support better education and a better future for all.”

Jewel Harris, Assistant Regional Manager for Growthpoint in the Western Cape who heads Growsmart, says: “The children who competed did themselves, their families, the schools and they communities very proud, especially the winners. The relevance and impacts of Growsmart have seen it grow from strength to strength to have an increasingly positive influence the futures of thousands of children.”

Winning team members and mentors in all categories were rewarded with generous prizes, with a total of over R500,000 being given to winners to promote even better access to quality education. 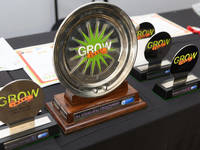