You would be forgiven for thinking that you had stepped in to The Balthazar restaurant in New York when first entering the Maximillien restaurant. From the dark wood panelling and mirrors, the red upholstery, to the black and white checked floors and the intricately pressed ceilings, slipping back to the 1920’s is highly possible. We can picture a loud table playing cards and smoking cigars, as fresh plates of pasta and seafood stream out of the kitchen to the hungry patrons, who wait patiently, sipping on their whisky in the smoky atmosphere. What can only be described as one of Sandton’s most well-known restaurants, the Maximillien is a stalwart of fine dining at its best. Floor to ceiling windows allow in soft natural light during the day, and create a picturesque view for night time dining.

The deck area is superb for cocktail parties and events, with windows that open right up to give you the feeling of almost being suspended between the surrounding buildings. Located in the bustling heart of Sandton Central, with easy access from Nelson Mandela Square and Sandton City, this is the place to go if you are looking for great food, attentive service and the gentle, melodic strains of a live piano playing in the background.

Behind the scenes, Kalpesh Hansjee, Executive Chef, DaVinci Hotel and Suites: As a child Kalpesh Hansjee was always in the kitchen with his mom and family, learning and absorbing as much as he could about cooking, starting and career straight after High School in the hospitality industry, there was no doubt that the kitchen was his stomping ground.

His first play ground was the famous Gatrile’s Son & Company run by famous winemaker Ken Forrester where the love of food and wine started. He then moved to Ile de France under the guidance of French Master Chef, Marc Guebert, learning the finer details of French Cuisine, He returned to the wine lands of Stellenbosch and worked at 96 Winery Road as a Sous Chef.

To further his energetic and creative mind the young chef moved to work with Bruce Robertson at the Cape Grace Hotel were the life as a hotelier started as Junior Sous Chef. Learning from the creative master Robertson himself Kalpesh Hansjee took all new found skills to Johannesburg to accept the culinary challenge at the Saxon Hotel.

At the Saxon he was promoted to Head Chef of Shambala Game Reserve were he cooked and interacted with the iconic Nelson Mandela and learnt that everyone is equal no matter who you are.

Seeking a new challenge he then moved to the Western Cape to the Newmark Hotel Group, as Executive Sous Chef, were he worked at the Victoria & Alfred Hotel, Dock House Boutique Hotel, The Forum Conference Centre, Nautili’s Yacht and assisted in opening up the Queen Victoria Hotel, in the famous touristic Victoria & Alfred Bay.

He then went on a sabbatical and travelled to Europe where he worked, lived and played in 1, 2, 3 Michelin Stared restaurants in the Netherlands, Austria, Spain, Italy, Germany and the South of France in the Cote du Azure region and in his travels he learnt you cannot produce a meal to perfection, but you can produce it close to perfection.

Travelling back to South Africa, he went into education and teaching and inspiring young chef minds at the Food & Beverage Institute and Pastry Academy as Head Chef and Hot Kitchen Lecturer. Missing the rush of the kitchen he sought out a new challenge and moved to the Michelangelo Hotel as Executive Sous Chef. An opportunity arose at the Maximillien Restaurant, DavInci Hotel and is now the Executive Chef there. 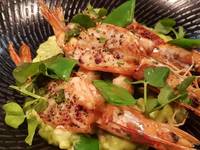