Growthpoint Properties, the largest South African primary listed property investment company on the JSE, has announced the renewal of a multiyear title sponsorship that will elevate the level of the three major squash events and develop the next generation of squash players.

Growthpoint first partnered with Squash South Africa in 2017 to raise the profile of the game in the country. This was done through the relaunch of the dormant SA Open in the first-ever squash tournament to be held in a shopping centre in South Africa. The renewed partnership will extend to the end of 2021 and will include a development programme for underprivileged children across South Africa.

Titled Growthpoint Rising Stars, the development programme will support and supplement existing initiatives across the country. Eleven select initiatives will host 25 children each where they will take part in coaching clinics, receive free equipment and take part in the Growthpoint Rising Stars Fun Day competition that will further enhance their ability.

Nadine Kuzmanich, Head of Marketing at Growthpoint, says: “We are pleased to extend our relationship with Squash SA and even more delighted to introduce the Growthpoint Rising Stars development programme, which will help create both means and opportunity for young stars from all backgrounds to participate and compete. We believe that focusing of the foundations of sport has a very real positive impact on community development and fabric of South African society, as well as making a lasting difference to the sport of squash in the country.”

Thanks to the partnership, in 2018 Squash SA was able to relaunch the Open Championship, now titled the Growthpoint SA Open, in an all-glass squash court in Brooklyn Mall in Pretoria that saw 20 international athletes compete against 20 of South Africa’s best across both the Men’s and Women’s divisions. The finals were decided in an all Egyptian affair and saw future world-beater, Farida Mohamed (16), crowned the youngest ever Growthpoint SA Open champion in the history of the competition.

Kuzmanich notes, “Our shopping malls are exciting and very public platforms that provide a uniquely powerful showcase for the competitions. Thousands of shoppers will be exposed to these top tournaments. By taking squash to the public it raises the profile of the sport, its sponsors and its champions, and inspires people of all ages who may never have seen squash played before to pick up a racquet and it a try themselves.”

Steve Doeg, President of Squash South Africa was delighted with the renewal, adding “Growthpoint and Squash SA have forged a great relationship over the past two years and the results of the growing exposure for squash through the use of the all glass court can be seen in the improved standard of our young squash stars. From U/11 to U/19 and all clubs across the country, the increase in interest in the game is remarkable. With the addition of the Growthpoint Rising Stars we are also very excited about spreading the game of squash further than it has gone before.”

The Growthpoint Interprovincials, formerly known as the Jarvis Kaplan Cup, will also form part of the partnership. The tournament is world-renowned for its camaraderie and is considered the world’s best and biggest interprovincial squash tournament. In the A Section, each province is allowed to include one marquee international player in its team of five, with this spot often filled by athletes who are among the top 10 in the world, something not seen in SA in any other sport.

On the upcoming Growthpoint Interprovincials, Steve Doeg added that “the historic Jarvis/Kaplan Interprovincial tournament now named the Growthpoint IPT will be played for the 60th year in mid-July in Durban and has grown to four men’s sections and two women’s sections. The tournament is played over five days and it is recognised as the biggest national team event in world squash, this tournament attracts many international stars and gives our up-and-coming youngsters the opportunity to rub shoulders with these stars. We look forward to the tightest ever competition for the respective Jarvis and Kaplan Cups.”

About Growthpoint
Growthpoint creates value for its stakeholders with innovative and sustainable property solutions that provide space to thrive. It is the largest South African primary listed REIT. Growthpoint is a FTSE/JSE Top 40 Index company, a Top 10 constituent of the FTSE EPRA/NAREIT Emerging Index and is in the FTSE4Good Emerging Index and FTSE/JSE Responsible Investment Index. It owns and manages a diversified portfolio of 559 property assets including 447 properties across South Africa valued at R77.2bn and a 50% interest in the properties at V&A Waterfront, Cape Town, valued at R9.2bn. Internationally, Growthpoint owns 59 properties in Australia valued at R38.4bn through its 66% share in ASX-listed Growthpoint Properties Australia (GOZ). It also owns 52 properties in Romania and Poland, 100% valued at EUR2.5bn through its 28.96% share in LSE AIM-listed Globalworth Investment Holdings (GWI) and its 21.6% share in Warsaw-listed Globalworth Poland Real Estate (GPRE). Visit growthpoint.co.za for more information, and connect with Growthpoint on Facebook, Twitter, LinkedIn and YouTube. 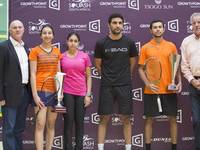