Gautrain has implemented various enhancements to the train schedule to provide a more convenient and comfortable service to passengers.

Here are some of the schedule enhancements passengers can look forward to:

The afternoon peak period has been extended Northbound only (from Park station to Hatfield station), Monday to Friday. The afternoon peak now commences at 14h38 as opposed to 15h28. Whilst trains will be available every 10 minutes from 14h38, off-peak fares will apply during this extended peak period.

On the North - South line, trains travelling Southbound (from Hatfield station to Park station) will depart earlier on weekdays only.

Gautrain has introduced additional 8-car trains during the morning and afternoon peak periods on the North-South line.

The first train departure times are as follows:

On weekends and public holidays, trains are now available every 20 minutes between OR Tambo and Sandton station as opposed to every 30 minutes.

Gautrain remains committed to providing a world-class service and will continuously monitor and evaluate our service so that we provide the most convenient and comfortable service without compromising safety and security. 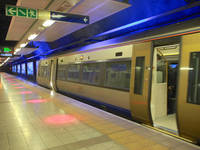