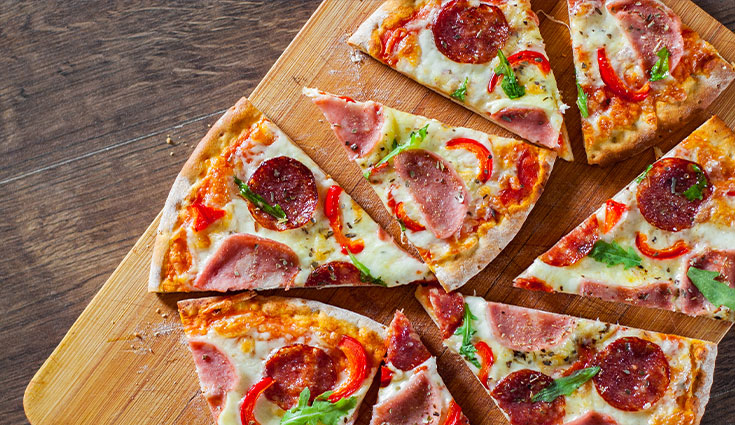 Grab a slice of pizza in Sandton Central!

It’s pizza month! One of the most favourite meals in the restaurant industry in South Africa. We’re so excited that we want to share facts, jokes and riddles…we’re going to do it anyway. Play along or ask your friends, family, and colleagues to answer them.

Let’s start with a pizza fact or two. Did you know that the most popular pizza topping in Brazil is green peas? Yes, we know that South Africans will raise a brow if you add it as a topping to their pizzas as it’s almost similar to pineapple on a pizza. Some people love it, but for the majority, it’s a no-no. Then there’s also the most expensive pizza in the world…are you ready for it? The Louis XIII costs $12000 and takes 72 hours to prepare. That’s R 201 067,80! Crazy right?

Want to hear a joke about pizza? Never mind, it’s too cheesy…lol! But here’s a riddle: There were 12 kids at a party. They ordered a pizza with twelve slices in it. They each took one, but there was still one slice left in the box. How is that? Think about it…the answer is available at the end of this article.

Where Did Pizza Come From?

Gerry Durnell created Pizza Month in October 1984, publisher of Pizza Today, a magazine dedicated to this delicious pie. It was likely derived from Focaccia bread served with toppings. With developments throughout the years, it slowly led to the pizza we know today – comfort food.

As with history, there’s never a straight line as some believe it originated from the Roman soldiers when they created the first pizza when they added cheese and olive oil to Matzah bread. However, the discovery of tomato on pizza bases as we know it today comes from the United States and Europe in the 16th century.

So where does pizza actually come from? It started in the Naples – the flatbread with the tomato sauce – and quickly became popular. It was almost exclusively sold from open-air stands and out of pizza bakeries until the 1830s. A tradition that is largely followed until today.

We’re pretty sure that you don’t need encouragement to celebrate this month with pizza. Honour this month by trying new toppings and experience what pizza can be – maybe that specific anchovy pizza your partner is continuously obsessed about might not be bad after all. We’re listing all the places below get pizza in Sandton Central so go out, try something new and enjoy pizza!

[Answer: Hopefully, you read the whole article and not only scrolled down, but the answer is: Each kid took a slice, and the last kid took the box with a slice in it.]

grab a slice of pizzapizza month

Movember: What ‘stache are you growing this month?